Monday saw the latest of the Club’s away days as members competed in the Club skittles championship at the Swan Hotel in Brewood. 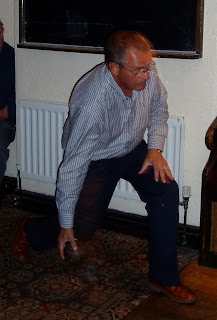 The Swan has an excellent skittles alley and that, and a ready supply of good beer, made for a great night of fellowship.

Despite Club Secretary Ivan Hill having led the competition from the out the championship was claimed by Ken Rees who with a perfect mix of aggression and skill scored a record 15 points in the last round of the competition to clinch the title. Well done Ken.
Posted by Jim Murphy at 23:05

When I saw that we were to have a speaker talking about the History and Development of England's Favourite Beverage I was expecting to hear all about the proud history of Guinness but speaker John Borthwick had a different drink in mind.

Having developed his interest in tea whilst stationed with the RAF in Lincoln John took the Club on a journey through three thousand years of the drinks history and recounting the birth of the drink when according to legend leaves from a nearby tea shrub blew into a cauldron of water being boiled for Chinese emperor and renowned herbalist Shen Nung so brewing the first pot of tea.

John encouraged members to venture beyond the classic tea bag and experience the wide range of teas available.

Our thanks to John for a very informative talk.
Posted by Jim Murphy at 22:55

The Birch Thompson Memorial Fund was established in memory of two former teachers at Colton Hills Community School, Graham Birch and John Thompson, who both died of heart attacks in 1980.

The Fund maintains Gelliwig, a residential centre in Porthmadog, North Wales. Gelliwig can accommodate up to 30 people and is used by the school and by youth groups and other voluntary organisations in Wolverhampton - thousands of local children have benefited from the Centre since its opening in 1989. 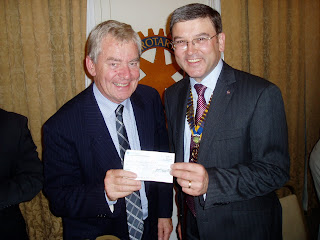 The Tettenhall Club has been a long time supporter of the Fund and when it became aware that money was needed for a replacement minibus to take children to the Centre Eric Johnson and Doug Evans arranged a fundraising bar-be-que which raised £700 towards the total. We were joined this evening by Keith Berry who accepted the donation on behalf of the Fund and who confirmed that they would shortly be taking delivery of the new vehicle.
Posted by Jim Murphy at 00:11

It was a pleasure this evening to be able to present Ian Rigby with his chain of office as an officer of the Club for the remainder of this Rotary year.

Ian is in his second year as our Club's sports officer and he has taken the Club's sporting achievements to new heights - Tettenhall are now District Croquet and District Darts champions. Not content with these achievements Ian has agreed to take on the role of the Junior Vice President and will serve as President of the Club for the 2012 -2013 Rotary year. Congratulations on your appointment Ian - you will have our full support over the coming years.
Posted by Jim Murphy at 23:18

Gerry Turner and Doug Evans reported back to the Club on their involvement with the Charity Tent Collection which takes place each year following the V Festival at Weston Park. 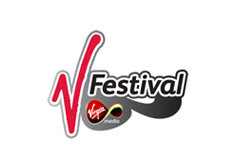 The collection, which is co-ordinated by the Rotary Club of Brewood and District, is now in its fourth year.

Over 250 volunteers helped to collect in over 1000 tents on the first day of the clean up alone. These tents which have been left by visitors to the festival and which otherwise would end up in landfill are distributed by the International Aid Trust Charity to be used in connection with disaster relief.
Posted by Jim Murphy at 23:00