July sees the changing of the guard in Rotary Clubs around the world as new Club Presidents take up their posts together with their Council members and begin to implement plans for their Club which have been in preparation for many months. 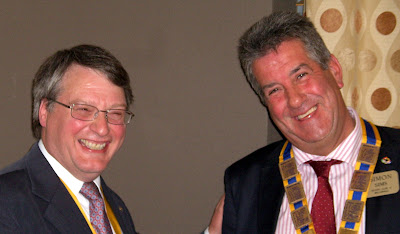 Its traditional for neighbouring Clubs to send representatives to these Handover meetings to extend our congratulations to the new President and his team and to wish them success in the year ahead. President Elect Ian Rigby had the pleasure of being our representative at the Rotary Club of Willenhall this evening to pass on our greetings and best wishes to new President Simon Sims. We wish President Simon and all of the members of the Willenhall Club every success in the coming year.
Posted by Jim Murphy at 22:14

Email ThisBlogThis!Share to TwitterShare to FacebookShare to Pinterest
Labels: Willenhall

Today was Armed Forces Day an opportunity to raise public awareness of the contribution made to our country by those who serve and have served in Her Majesty’s Armed Forces, and an opportunity for the City to show its support for the men and women who make up the Armed Forces community: from currently serving troops to Service families and from veterans to cadets - all embodying the Rotary ideal of Service Above Self. 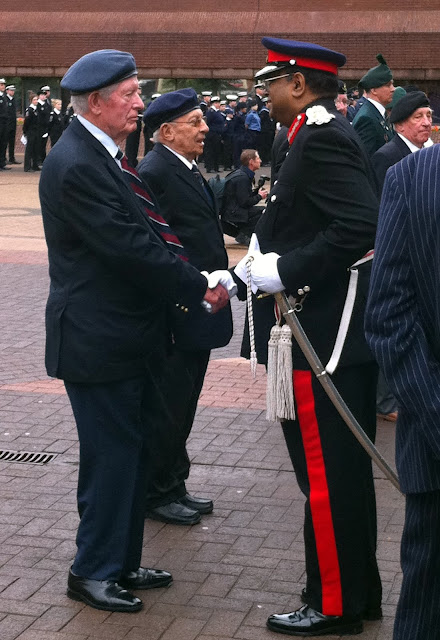 Regular, reserve, and cadet forces paraded through Wolverhampton today together with ex servicemen (including Club members John Wain and Les Bouts). The salute was taken by City Mayor Councillor Bert Turner and Her Majesty’s Lord-Lieutenant of West Midlands, Paul Sabapathy CBE before an outdoor drumhead service in St Peter’s Square.
Posted by Jim Murphy at 23:02

Every year our friends at Tettenhall Round Table host the annual summer fete - this years event will take place on the Green on Sunday 3rd July starting at midday and running until five. 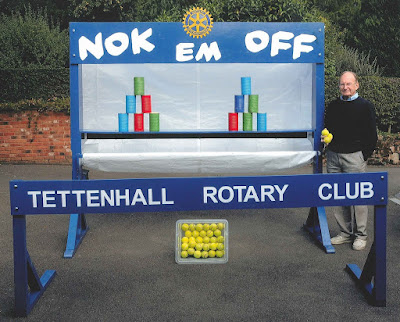 As with previous years Tettenhall Rotary will be supporting the event and it will also be the first outing for our new Nok Em Off attraction. The result of many hours of hard work by Club member Ray Hill we expect this to be a regular feature of this and other events for years to come - so don’t forget to try and win a prize by knocking all the cans off.

The Inner Wheel Club of Tettenhall will also be running a brick a brack stall at the event and we and the other community groups present hope to raise over £10,000 to benefit local good causes.
Posted by Jim Murphy at 23:17

Congratulations to Lynne Cave who has now taken over as President of the Inner Wheel Club of Tettenhall from Shirley Jones. 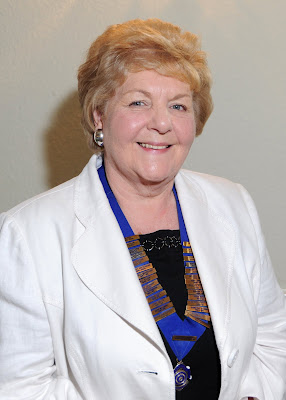 Shirley has had a great year at the helm and its been a pleasure to spend time with her and with the other members of the Inner Wheel Club. During the course of the year the ladies of Tettenhall Inner Wheel have supported through their fundraising the West Midlands Lupus Group (Lupus UK), the Alzheimer’s Society, Motor Neurone Disease Association, National Osteoporosis Society, Compton Hospice, Acorns and the Air Ambulance.

Originally founded in 1923 by a group of ladies who decided that they wanted to help with the work of their Rotarian husbands the objects of Inner Wheel are to promote true friendship, to encourage the ideals of personal service and to foster international understanding. The Tettenhall Club exemplifies these qualities.

Inner Wheel is an all female organisation with membership open to female relatives of Rotarians or former Rotarians, Inner Wheel members and Rotaract. Lynne is the wife of Club member David Cave and I have no doubt that they will make a formidable team over the coming year.
Posted by Jim Murphy at 23:28

Rotary is great way to get to know people - but sometimes you can learn a little too much about them as we found out with tonight’s life talk from our newest member Mike Dickerson. 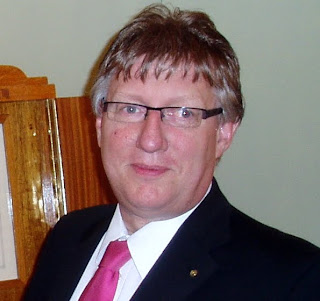 Whilst we were expecting to hear few war stories arising from Mike’s current business, caring for peoples feet, we were instead treated to an entertaining resume of his life - his early career extorting chocolates from his sisters boyfriends as the price for leaving them alone - his early training at the Staffordshire agricultural college where they appeared to have grown some very strange plants - and his later career selling vibrators (the concrete variety) to the Germans.

A member of the International team in the coming year we are sure to see some novel fund raising ideas from Mike. The team’s fundraising in the new Rotary year kicks off with a BBQ to be held at Wolverhampton Cricket Club on Sunday the 10th July in support of Village Water, helping to bring clean drinking water and sanitation to Africa. Tickets are just £12.50 and everyone is welcome - if you’d like tickets then contact a Club member or email us.
Posted by Jim Murphy at 00:04

Over 600 people today attended the Ascot Ladies Day event organised by Club member Ken Whalley and his wife Jan. Now in its tenth year the event has become regular fixture in the social calendar of many of those attending and has raised thousands of pounds for Rotary and other local charities. 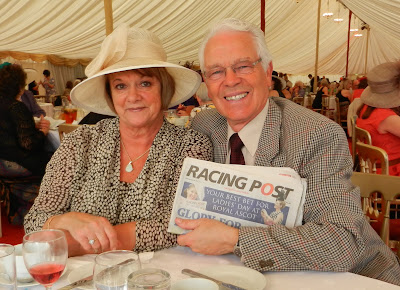 Held at the Wolverhampton Rugby Club those attending were treated to an excellent meal and to entertainment from the Bill Bailey Jazz Band and later the opportunity to don lederhosen for a spot of traditional post race oompah band action.

Throughout the day we were able to follow the racing and fashion action on screens around the marquee and to lay bets on our fancies with the assistance of an on site bookie. As in previous years the ladies attending the event dressed fit for the Royal Enclosure and proved once again that you don’t need to be at Ascot to have great ladies day at the races. 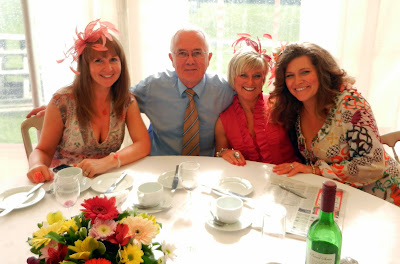 The day was a tremendous success and once again all due to the work of Ken and Jan - our congratulations and thanks to them for organising such a great day.
Posted by Jim Murphy at 22:42

Magistrates in the Community

Magistrates' courts are a key part of our criminal justice system dealing with over 95% of all cases.

Cases in the magistrates' courts are usually heard by a panel of three magistrates who are appointed by the Crown.  Magistrates aren't paid for what they do and whilst they may claim expenses and an allowance for any loss of earnings the role which they undertake exemplifies the Rotary ideal of service to their community.

Stephen Russell, a member of the Wolverhampton bench, joined our meeting tonight as part of the Magistrates in the Community Project - a Magistrates' Association initiative that has developed over the past few years to increase public awareness of the role of magistrates in the criminal and civil justice system.

Stephen ran through a number of scenarios with members of the Club which gave us a valuable insight into the decisions which he and his colleagues take when sentencing. The presentation gave rise to a lively discussion in the room and left us with a much greater understanding of the work of our magistrates.

Stephen and the other magistrates involved in the Project are willing to attend primary, secondary, sixth form colleges, schools, community groups and employers to discuss their work and on the evidence of tonight it's well worth doing. Visit the Magistrates Association website to arrange a visit of your own.
Posted by Jim Murphy at 08:31

The members of the Tettenhall Rotary Club have joined with Rotary Clubs around the world to meet the challenge laid down by the Gates Foundation to match its 200 million dollar contribution towards the cost of eradicating Polio.

The money raised from thousands of events held by Rotarians around the globe means that this disease is now on the verge of eradication. The latest Rotary campaign highlights just how close this is.

Visit the This Close website to add your support.
Posted by Jim Murphy at 21:46

Email ThisBlogThis!Share to TwitterShare to FacebookShare to Pinterest
Labels: Foundation

﻿﻿﻿﻿40 children and staff from Wightwick Hall School enjoyed a fun-packed day as the Club's guests at Drayton Manor Park today, joining over 20,000 other disabled, disadvantaged and special needs children at events held across the country as part of the Rotary 'Kids Out' Day.

This annual event, organised by Rotary, enables children who are underprivileged, disabled or have special needs to have a great day out for free. Rotary has been providing days out for children with special needs since 1990 with the Drayton Manor event being organised by our colleagues in Rotary District 1060. Its a tremendous amount of work for them but it was obvious from the reaction of the kids that it was time well spent.

George Bryan OBE, founder of the award-winning theme park, helped to conceive the idea for the annual Kids Out Day to be held at the park and our thanks go to all of the management and staff at the Park who helped to make such a great day for the kids.

The kids were a credit to their School on the day and everyone enjoyed the huge number of rides and attractions at the theme park, with the new Ben 10 ride proving to be a particular hit with the kids and with Rotarian Greg Instone.
Posted by Jim Murphy at 22:40

The Club Assembly is an important part of every Rotary club’s calendar.

With one Rotary year drawing to an end and another about to begin the Club Assembly is an opportunity for our incoming president and his team to set out their objectives for their year and to engage the support of the members of the Club.

Incoming President John Francis and his team have put an impressive amount of planning into their year and there’s little doubt that this will translate in to an exceptional year ahead of the Club in terms of its fundraising, its community service and its fellowship; amply fulfilling John‘s aim of ‘Fun with a Purpose‘.