Today is World Polio Day. Polio is a serious viral infection with no cure that causes temporary or permanent paralysis, which can be life threatening. 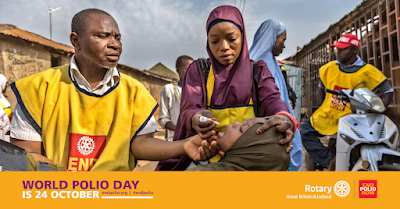 Polio invades the nervous system and can cause total paralysis in a matter of hours. It can strike at any age but affects mainly children under 5. Before a vaccine was introduced in the 1950s epidemics would result in up to 7760 cases of paralytic polio in the UK each year with up to 750 deaths.

Rotary Clubs around the world have been working to eradicate polio for more than 35 years and over that time we’ve managed to reduce polio cases by 99.9%. Rotary members have contributed more than $2.1 billion and countless volunteer hours to protect nearly 3 billion children in 122 countries from this paralyzing disease. Rotary’s advocacy efforts have played a role in decisions by governments and the Gates Foundation to contribute billions more to the effort.

Today polio remains endemic only in Afghanistan and Pakistan and with your help  a polio-free world is possible. Join with Rotary this World Polio Day to End Polio Now: endpol.io/wpd