Carrying the Torch for Rotary


The 43rd day of the Olympic Torch tour of the UK saw it visit Wolverhampton today. Many of the torch bearers are being recognised for the volunteer work which they undertake in their communities. The flame was carried through Wolverhampton by Jamie Ward a young athlete who runs for the Wolverhampton and Bilston Athletic Club. Jamie encourages others to participate in sports and also raises funds for the athletics club and his local youth football team. 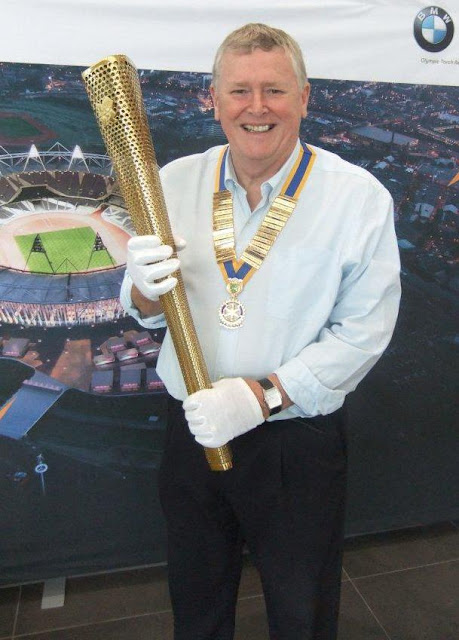 Today also sees the last day of the Rotary year and for President John the end of his Presidential year. John's Club theme for the year was 'Fun with a Purpose' and he set out to build upon the already strong fellowship within the Club to enable us to significantly increase the support which we provide to our local community and in particular to support the new Rotary and Volunteer Suite at Compton Hospice. The hard work which John and his team have put in has certainly paid off with this year seeing the Club raise the second highest amount of charity funds in its history as well as having a great time in the process. The opportunity to hold the Torch as it passed through Wolverhampton was a great way for John to mark the end of such a successful year.

With the support of members of the Tettenhall Club eighteen students, between Years 9 and 13, from The Royal School Wolverhampton have today joined together to establish a new Interact Club at the School. 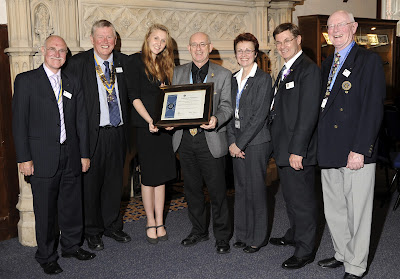 Interact Clubs are a service club for young people aged 12 – 18 giving them the opportunity to become involved in fundraising activities to support both local and international projects with the goal of furthering international understanding and good will. The new Club’s first international project will benefit The Madina Basic Cycle School in The Gambia and they have already raised £370 through the collection of reusable clothing.

Interact Clubs are self-governing and self-supporting, and through participation, students are given an opportunity to “lead, serve and connect” – to gain experience in developing leadership skills, holding positions of responsibility, developing personal integrity, helpfulness and respect for others by doing something meaningful and useful for local and international communities and to develop international links. Participation in Interact not only develops personal skills but the values of individual responsibility and hard work.  Participation can also support elements of the Duke of Edinburgh award scheme and is highly commendable as an addition to a university or future job application.

Today President John had the pleasure of inaugurating the new Club and installing Rebecca Reid as its first President. President John welcomed the Club into the family of Rotary and went on to say: “Tettenhall Rotary Club is proud to be the sponsors of the new Royal School Interact Club. We pledge our continued support and encouragement for all you seek to do and  wish you every success and much enjoyment in your future activities”.  Rotary District Chairman, Barry Preen, joined us to present the new Club with its Charter and commended the new club members for their initiative and commitment.

The group will also be supporting fundraising for Compton Hospice and you can see them in action at the Tettenhall Village Fete on Sunday 1st July.
Posted by Jim Murphy at 16:00

In 1989 John Moores, the founder of the Littlwoods chain, came up with the idea of running an outing for local disabled children. The day was such a success that he looked to replicate it in other parts of the country and he turned to his local Rotary Club for help to turn it into a national event.

The event has now given birth to the Kids Out charity and every June Rotary Clubs throughout Britain and Ireland together with KidsOut take over 25,000 disadvantaged children on a great big day out. The children visit the seaside, theme parks, adventure playgrounds & zoos giving them all wonderful memories to cherish for a lifetime.

As part of this Tettenhall Rotarians palyed host today to 30 children from the Penn Fields School in Wolverhampton who joined us for an exciting day on the rides at Drayton Manor Park. All of the children had a wonderful time and our thanks go to all of the management and staff at the Park who helped to make such a great day for the kids.

As the current Rotary year nears its end Clubs around the country are holding their Assembly meetings giving their incoming Presidents the opportunity of setting out their objectives for the coming year and introducing the team who will help them to lead the Club in its fund raising and fellowship activities. 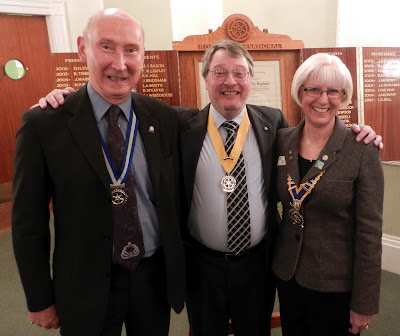 Local jeweller Ian Rigby takes over as President of the Tettenhall Club in July and at this evenings Assembly meeting Ian set out his own vision for the Club during his year of office. Ian will be concentrating on ensuring the already strong fellowship within the Club is strengthened further and will look to enhance the Club's presence in the local community in the belief that Rotarians are never happier than when bringing happiness to others.

Ian will be assisted by:

Ian wants to make sure that every member feels involved in the operation of the Club and with that in mind each member has been allocated to work with one of the committee chairs. We're grateful to all of the Committee Chairs who are helping Ian in the coming year and they can all be sure of our support.

Assistant District Governor Carol Reilly attended the meeting as the representative of District Governor Elect Trevor Davies and commended the Club on the work which it was already undertaking in the local community and on Ian's plans to extend this in the coming year.
Posted by Jim Murphy at 23:10