Local historian Roy Stallard has, as a former nurse himself, a keen interest in the history of the health services in Wolverhampton.

Roy joined us this evening to explain the role played by the Wolverhampton hospitals in treating wounded service men in the two world wars and the support which they received from community organisations and the citizens of the town to help the wounded in their recovery.

To some of the Club's older members the talk was a trip down memory lane as they recalled as boys having watched the wounded being transferred into ambulances at Tettenhall railway station for the journey to the Royal Hospital.

Following the redevelopment of the Royal Hospital site by Tesco Roy will be maintaining a display on the site showcasing the history of the hospital. Our thanks go to Roy for helping to keep the City's history alive and for sharing it with us.
Posted by Jim Murphy at 23:56

The Starfish Café at Wightwick 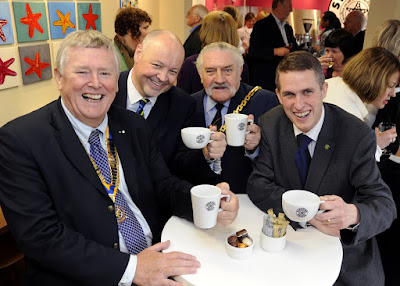 The School has recently reviewed its curriculum to place a greater emphasis on workplace activity in order to better prepare its students for the world of work and the new café forms an integral part of this new skills based curriculum. The work which the school is undertaking with its partners aims to address the under-representation in the workforce of young people with learning difficulties and/or disabilities.

Members of the Club have worked with the School for several years to help develop its annual business and enterprise competitions and we’re looking forward to supporting the students in this latest venture.


The Wolverhampton MS Therapy Centre has been helping local people affected by the disease for over 25 years now and Rotarians have been involved in its work from the very beginning. 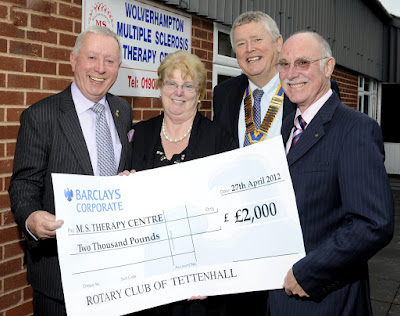 The Centre operates a Hyperbaric Oxygen Chamber which helps to relieve the extreme fatigue which sufferers feel. It also offers a range of physiotherapy and reflexology services designed to alleviate some of the more distressing symptoms of the disease and to help sufferers to cope a little better with everyday life.

The Centre has recently acquired additional premises which it is in the course of developing to provide further support for its users. President John and Community Service chair Roger Timbrell had the pleasure of visiting the facility themselves today in order to see first hand the work which is being undertaken and to show the Tettenhall Club's support by presenting Centre Chairman (and Wolverhampton Rotarian) Peter Williams and Centre Manager Brenda Smith with a cheque for £2,000.

The donation represents part of the money raised by the Club during our Sleigh collections over the Christmas period when over £6,000 was raised to support local charities. The Centre will use the money to buy additional equipment for their new premises.
Posted by Jim Murphy at 10:00

As a Rotarian you are always a welcome guest at the meetings of any of the 34,000 Rotary Clubs around the world - its an opportunity to see how Rotary operates in other areas and to make new friends and contacts.

Club Junior Vice President Sammy Chung, a senior lecturer at Wolverhampton University and Honorary Professor at Shenzhen University, often visits Hong Kong and other parts of China. During a recent visit to Hong Kong he had the opportunity of attending a meeting of the Happy Valley Rotary Club. 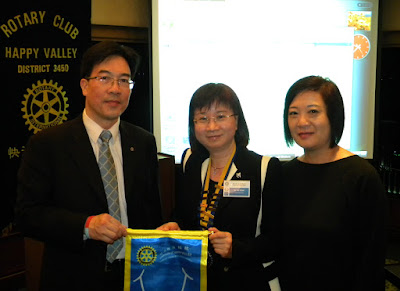 The Club meets every Monday at the Hong Kong Bankers Club and counts amongst its members barristers, accountants, University lecturers as well as a legal adviser to LegCo - the Hong Kong legislative council. Whilst at the meeting Sammy heard from Jeremiah Chan about the introduction of the new senior secondary curriculum in Hong Kong and from Chan Tsz Wa and Cheng Chun Tou two Interact members who explained the voluntary work which their Club was undertaking in the local community.

Sammy tonight presented President John with the Happy Valley Club banner which President Fenn had sent back to our Club with him.
Posted by Jim Murphy at 22:54


We were joined this evening by Simon Warren, the Chief Executive of Wolverhampton City Council. A former Rotarian himself Simon comes to local Government by a somewhat unusual route. Originally an aviator with the Royal Air Force Simon's 25 years in the service saw him flying Vulcan bombers and chasing down Russian submarines and Caribbean drug smugglers in Nimrods before ending his flying career enforcing the no fly zone over Iraq shortly after 9/11. The end of his flying days brought fresh opportunities and three years spent with NATO in the USA as Head of Strategic Management. 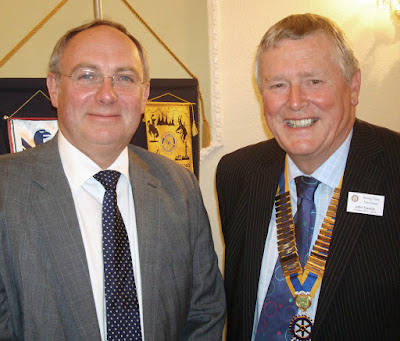 Once he'd left the service Simon looked for a way to put the change management skills which he'd acquired during his time with the Air Force to use and served as Rugby Council's Chief Executive for four years before joining the team at Wolverhampton.

Despite the advantages of its location the Wolverhampton economy has been in decline since the mid 1970's. Simon is adamant that he hasn't joined the Council to manage decline and he and his team are focusing on promoting economic development around the City's existing strengths. Naturally with his own background Simon has a particular interest in recognising the strength of the City's existing aerospace companies and shortly after taking up his position the council took a stand at the Farnborough International Air Show in order to showcase and support our existing manufacturers and to attract other aerospace companies to the area. The City's existing strong links with the Indian sub-continent are also seen as an opportunity to encourage both inward investment and export opportunities for manufacturers and the Council will look to build on these.

Simon noted the changes which had taken place in the City's planning department and which were taking place in other parts of the Council to make departments more commercially sensitive and the important role which this played in encouraging investment into the area. He pointed to the recent decision of Jaguar Land Rover to build a new engine plant in the City as an example of how this approach was now paying dividends and with this and major retail developments by Tesco and Sainsburys about to get underway Simon is convinced that there will be a change in peoples attitudes in the City and that there will be a growing belief that things can be better.

Our annual Ladies Weekend is a chance for the members of the Club to thank their partners for the support which they give to both their husbands and to the work of the Club over the year.

Appropriately enough in a Jubilee year this years trip took us to the Queen's Hotel in Cheltenham Spa. Cheltenham is a Regency gem characterised by the many town houses with intricate ironwork balconies and painted stucco façades which line the historic Promenade, squares and terraces. No doubt of equal interest to the ladies was the ample opportunity which the town affords for a little retail therapy. Our weekend began with an entertaining visit to the town's Everyman Theatre on Friday evening where the Cheltenham based amateur troop the Cotswold Savoyards performed Titanic The Musical - commemorating both the centenary of the sinking of the ship and the society’s own 50th anniversary. Based on numerous actual characters aboard the great ship, the show focused on their dreams, hopes and aspirations – as the story of the launching, the collision with the iceberg, and the sinking was played out against the background of the rigid class-distinctions of the Edwardian Age. 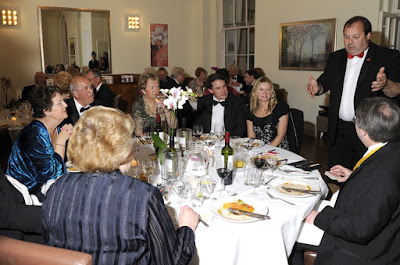 Members had the opportunity to learn a little about the town's history during a walking tour of the town on Saturday morning. Cheltenham has been welcoming visitors for nearly three hundred years, ever since the discovery of the first natural spring. The very first Cheltenham Guide on 1781 described a visit to the town as "a journey of health and pleasure". According to legend the first medicinal waters were discovered when pigeons were noticed pecking at salty deposits which had formed around a spring on the present site of Cheltenham Ladies College. The transformation of the town into a fashionable resort began a few years later when in 1788 King George III visited the town to take the water cure. 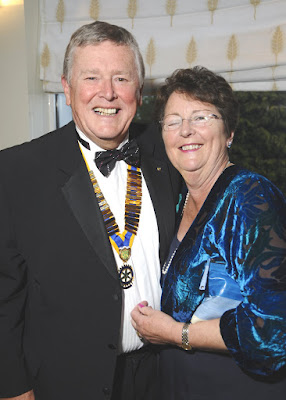 The weekend was topped off on Saturday evening with our traditional black tie dinner featuring magical table-side entertainment from Les the Fez.  The toast to the Ladies was formally proposed by President John who thanked the ladies for the support and forbearance which they give to the members of the Club during the year, the reply for the ladies being made by the Presidents Lady, Linda, who toasted the members of the Club. 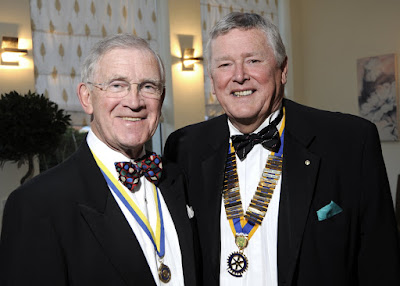 Our thanks go out to Peter and Pat Maddox who put a tremendous amount of time into organising the event for making this such a great weekend.
Posted by Jim Murphy at 21:39

The Defence College of Aeronautical Engineering provides high quality and up-to-date aeronautical engineering training to members of each of the three armed services in order to meet the needs of tomorrow's front line. Headquartered at RAF Cosford in Wolverhampton the City can be proud of this world class engineering facility. Today the members of the Club had the opportunity of visiting the College to see the work which is being carried out. 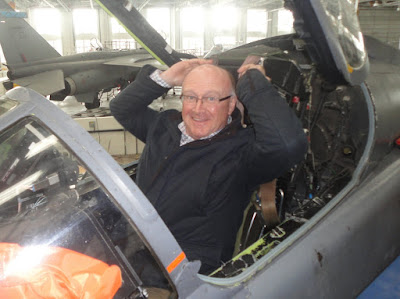 The sight of twenty Jaguars, single seat attack-bombers, lined up under one roof was one to excite everybody, especially schoolboys and Rotarians, young and old.  Aeroplanes, which also included Sea King helicopters and Tornado fighter-bombers, serve as a classroom for RAF students where they are taught avionics, weaponry, air-frame and jet engine maintenance. Students, who come from all over the world, can also have a cockpit experience: climb into the mock-up plane, settle in the  cockpit, start up the engines (with sound effects) taxi then take off while all your actions are viewed by instructors on two very large screens. There was a long queue of Rotarians dying to have a go!

Cosford was originally built as a disposal field and assembly plant for planes built in the Midlands but sent out to Shropshire to avoid concentrating too many assets in one place during wartime. RAF Cosford is now the principal centre for flight engineering training in the UK. There were plans to move it to South Wales, since shelved, but now a move to RAF Lyneham is mooted.  The CEO of Wolverhampton Council, an ex RAF man, said that it was daft idea. So let’s hope the politicians both national and local can prevail so that it stays put, is expanded, so to reinforce the manufacturing presence and prestige of our City and surrounding area.

A couple of weeks of wonderful Spring weather has got most people thinking about what to do with their gardens this year so it was excellent timing to hear from an old friend of the Club tonight, TV gardening expert Howard Drury. 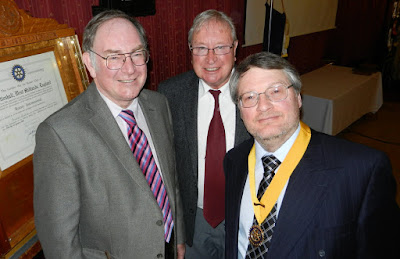 With the weather due to turn however and snow about to hit the region Howard explained the steps we should take to protect plants which had been fooled into an early start and which could be damaged by the cold snap.

Howard - who can be found at Ashwood Nurseries most Sundays - is convinced that we are in for a dry spell this summer and in years to come and he encouraged people to do their bit to conserve water by adopting traditional watering techniques and to start to change the way that they plant their gardens by introducing drought tolerant plants.

Rounding of the evening with a question and answer session Howard gave us all some great ideas to take away.
Posted by Jim Murphy at 22:32