Its always a pleasure to meet Rotarians from other Clubs and this evening we were joined by Geoff Hill, a member of the Rotary Club of Stourbridge. 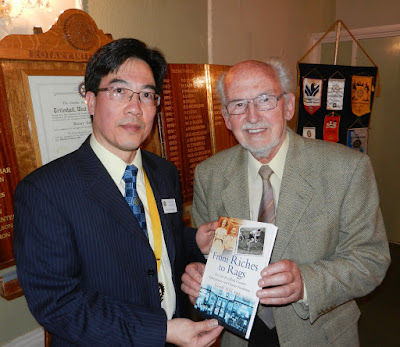 Geoff's electrical store in Amblecote is a local institution and he shared with us the story of how he had made his start in retailing and how he was eventually able to use his lifetime of retail experience to launch a chain of retail shops on behalf of The Mary Stevens Hospice in Stourbridge.

Over 80% of the Hospice's annual running costs are generated by donations from the local community including the invaluable contribution which the retail outlets which Geoff established continue to make.
Posted by Jim Murphy at 22:52


The world's first service club, the Rotary Club of Chicago, was formed on 23 February 1905 by Paul P. Harris, an attorney who wanted to capture in a professional club the same friendly spirit that he had felt in the small towns of his youth.

One hundred and seventeen years later that Club - affectionately known as Rotary One - still meets in Chicago and is visited by thousands of Rotarians from around the world. Our Club Secretary John Margetts recently had the opportunity to join them and to bring back one of their Club banners which he this evening presented to President John. 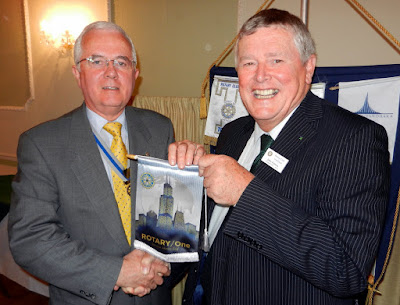 "A trip to Chicago to attend the US Housewares Show offered me the opportunity to visit the club where Paul Harris founded Rotary in 1905.

Today the club meets on the 5th floor of the elegant Union League Club, a low rise skyscraper, close to City Hall and west of State Street. Although they have 400 members meetings usually generate just 40 or 50 attendees. There is no minimum attendance attached (sic) to membership. It has not affected their giving as Chicago One has raised over £733,000 for Polio eradication since 1986.

There are differences to Tettenhall, grace is replaced by a ‘thought for the day’ and the toast to the Queen by the assembly standing and reciting the objects of Rotary.  An excellent three course cost $34 (£22) at a round tables and coffee is available throughout the meal. Their hospitality was generous and I ended up talking to many people but not one had heard of Wolverhampton, so it was ‘a club near Birmingham’. Members wear large round badges 4”Ø which await them on arrival. All organised by a full time secretary and assistant. Photos are taken of everyone as they arrive which are projected throughout the meal on a large screen on the dais; you can see mine with their President Barry.

It was an honour to have been where it all started and I shall not forget my lunch with Club One."
Posted by Jim Murphy at 23:55


It was great to catch up with Keith Berry, an old friend of the Club, this evening.

Keith has recently been honoured with an MBE in the Queen's Birthday Honours List in June 2011 for services to Young People in Wolverhampton. 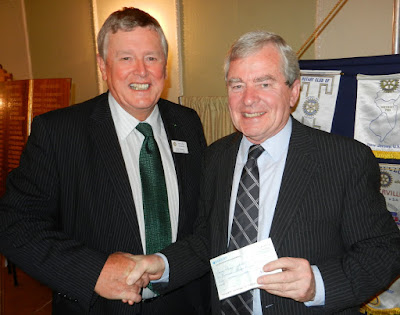 Keith was joining us in his role as representative of Power Pleas the Wolverhampton charity which provides powered wheelchairs to local disabled youth to help them live a fuller life.

Power Pleas is about to celebrate its 25th year of operation and the Club has been raising funds to support for their work for most of those years.

Most recently members of the Club were invited by Wolverhampton Wanderers to collect outside the Molineux stadium before the Baggies derby and we were pleased tonight to hand Keith a cheque for £1,003 to allow the charity to buy a mobility tricycle for a local youngster with mobility problems.

Keith is active with a number of local charities and the award of the MBE is richly deserved recognition of his work.

We were joined this evening by Coach Roger Wilkinson formerly a player with Plymouth Argyle and Luton Town, a coach with Crystal Palace, West Bromwich Albion and the New Zealand under 17 and 20 teams and director of coaching for the New Zealand Football Association. 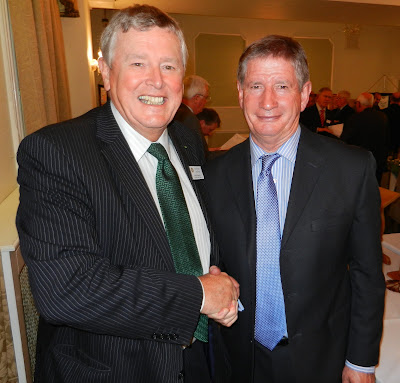 Now living in Wolverhampton Roger explained how a shared coaching ethos with John Cartwright led the two of them to found Premier Skills - a local not for profit company with a worldwide reach - where he is now a Director of Coaching.

Roger and the team at Premier Skills are convinced that the current FA approach to the development of players and coaching staff simply does not work and through their development of their Practice Play system they have sought to replicate the conditions which made the street football of the 50's and 60's such a great incubator for British footballing talent.


Its not surprising that the team at Premier Skills take part of their inspiration from the great Liverpool sides of Shankly and Paisley but it was a little more of surprise to hear how important a role Field Marshall Montgomery has played in the development of their system.

Roger explained how Monty had understood the need to focus on the job at hand, the need to get the morale right within the team, the importance of knowing your enemy, of surrounding yourself with good people and of clearly communicating to all both the culture he expected of them and their objectives.

Premier Skills have translated this onto the football field by ensuring that everyone understands the game style which they are working towards, the importance of governing the ball, the need to go forward with purpose, to create clever chances and to maximise finishing opportunities. Training is focused on playing football rather than ball games.

Roger stressed the importance of not only winning but winning with style and the Club wishes him and the rest of the team at Premier Skills every success in bringing about their coaching revolution.
Posted by Jim Murphy at 23:02

Rotary’s Group Study Exchange (GSE) program is a unique cultural and vocational exchange opportunity for business people and professionals between the ages of 25 and 40 who are in the early stages of their careers. The program provides travel grants for teams to exchange visits in paired areas of different countries. For four to six weeks, team members experience the host country's culture and institutions, observe how their occupations are practiced abroad, develop personal and professional relationships, and exchange ideas. 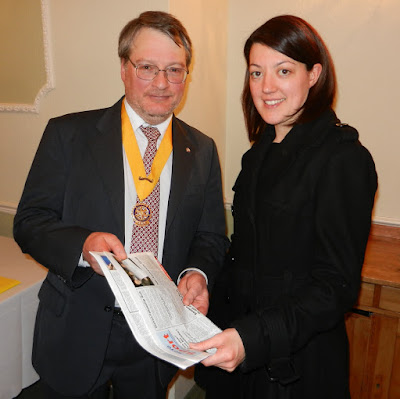 October saw the visit of the visit GSE team from Rotary District 5550 which spans Northwestern Ontario, Manitoba and Saskatchewan in Canada. As their visit to this country drew to an end Tettenhall had the great pleasure of hosting a Farewell Rally for the team.

As part of the GSE Exchange program a team of young professionals from within our own District 1210 are currently preparing for their own visit to Canada where members of the Canadian team and of the Clubs within District 5550 will give them a taste of how life is lived in Canada and an insight into how their occupations are practised.

The Tettenhall Club is proud to be the sponsoring Club of team member Jayne Lawrence, Head of Information at the Royal Wolverhampton Hospitals Trust, who joined us at tonights meeting as part of her preparations for the visit. Jayne will make a wonderful ambassador for the Club and the City. We wish her well in her travels and look forward to hearing from her when she returns.
Posted by Jim Murphy at 23:59 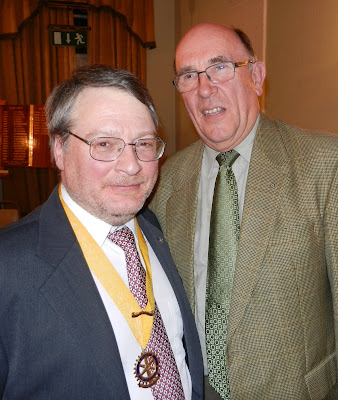 Originally, membership of Round Table was limited to men aged between of 18 - 40 years (now 18-45), so that following his 40th birthday, a member of Round Table would have to retire. He was then eligible to join a 41 Club, which is the pet name for The Association of Ex-Round Tablers' Clubs.

The 41 Club gives ex Tablers an opportunity to continue the friendships they have made whilst in Round Table and encourages them to continue their active involvement in the Community as well as supporting their local Round Table club.

Many members of our own Club are also members of the Tettenhall 41 Club and one of their members came along tonight to let the rest of us know exactly what they got up to on their latest Lads Weekend Away in Liverpool as Gordon Nicklin shared with us a documentary that he had produced covering the annual Tettenhall 41 Club weekend away.
Posted by Jim Murphy at 23:05

Its always a pleasure to welcome a new member into the Rotary family but tonight we also had the pleasure of welcoming the son of an existing member of the Club as our latest member. 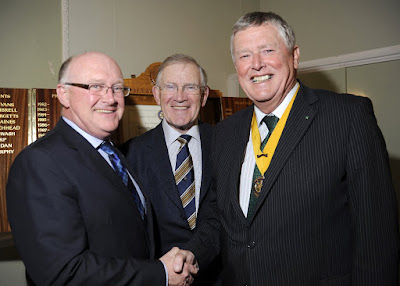 Local property developer Peter Maddox has been a member of our Club for sixteen years now and his contribution to the Clubs activities during that time was recognised in 2006 by the award of a Paul Harris Fellowship.

Tonight his son Simon who also works in the family business, Peter Maddox & Associates, joined his father as a member of the Club. A former a member of Wolverhampton Round Table and already a regular supporter of the Clubs activities we know that Simon has it in his genes to make a great Rotarian and we look forward to sharing some great times with him and his family.
Posted by Jim Murphy at 23:27