Henry Carver - How to Generate Wolverhampton


Tonights speaker Wolverhampton business man Henry Carver has made quite an impact in the City over the last year. 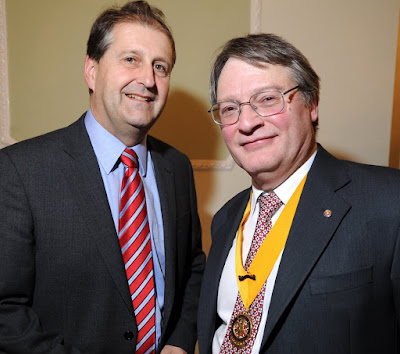 Frustrated by the failure of the Summer Row development Mr Carver called  on local businesses to join together to fight back against what he saw as obstructive Council policies and red tape which he believed to be blighting the City.

Over 300 people attended the first meeting with Mr Carver called in February leading to the formation of the Wolverhampton Business Group which aims to develop pro-business, pro-job policies and to encourage and support the City Council to enact those policies in order to create a more vibrant local economy in which there are more and better paid jobs.

Following lobbying by  Wolverhampton Business Group and other interested parties they believe that there has been a "sea change" in the Planning Department following recognition by the Council of the urgent need to send out a "pro-business, pre-development message" but Mr Carver urged the business community in Wolverhampton to remain vigilant and to maintain consistent pressure on the Council to keep up the good work.

Club members and supporters donated a wide range of promises including rounds of golf at South Staffs Golf Club and at the Belfry, County Cricket Days at Edgbaston and holiday flights and accommodation in Majorca (the days star performer raising £540). 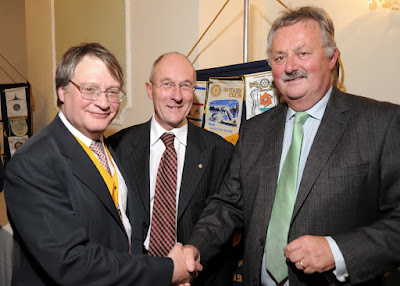 In all 58 lots were offered under the expert hammer of local auctioneer and Club member Ken Swash. The two Kens gave us all a great day with a lot of laughs and the generosity of the room amply rewarded all of their hard work raising £8,800 for Compton Hospice. Our thanks go to the two Kens and to everyone who supported the event.
Posted by Jim Murphy at 21:58

We were joined this evening by Trevor James who gave a talk on the English origins of the Olympic Games.

Trevor is the Honorary Secretary of The Historical Association a charity which supports the study and enjoyment of history.

By the 1850s these had developed into recognisable athletic meetings and Trevor argues that it was the success of events such as this which formed the template for the modern day Olympic Games.
Posted by Jim Murphy at 22:18 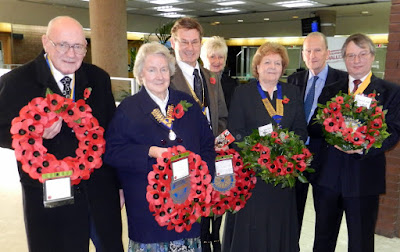 Following the observance of a two minute silence and a Drum Head Service in St Peters Square poppy wreaths were laid before the City's cenotaph.  There was tremendous support for the ceremony which was followed by a formal service in St Peter's Church where the sermon was given by The Reverend (Squadron Leader) Christopher Lawrence Chaplain DCAE Cosford. 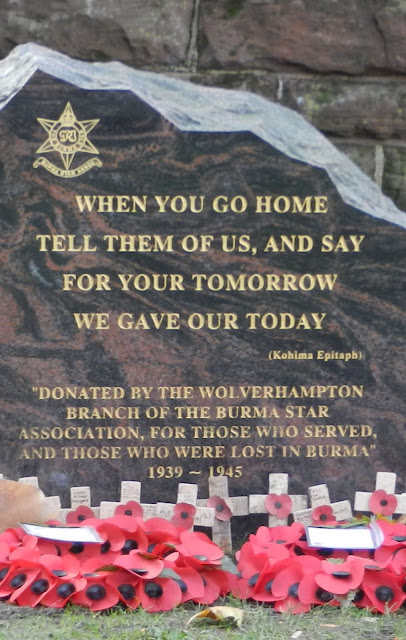 Reverend Lawrence called on his own memories of serving under fire in Kandahar and spoke of the struggle which many surviving service personnel face when returning from active service to cope with their memories of conflict and of the importance of their being given the time and support to allow them to work out the meaning of those memories and to emerge with a renewed understanding of the purpose of their life.
Posted by Jim Murphy at 13:26

Perton Community Hall was the venue for a special Armistice Day fund raising Concert hosted by the Club this evening. Over 200 guests were entertained by the Four Oaks Big Band with a selection of classic big band music. 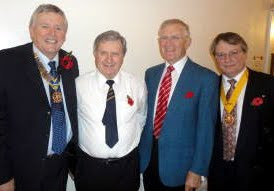 A sell out night the concert raised £2,500 which will go towards the funding of the Rotary Volunteer Suite at Compton Hospice. Our thanks go to the Four Oaks Big Band for great nights entertainment and to Rotarian Peter Maddox for all of his hard work in organising the event.
Posted by Jim Murphy at 22:43

Rotary has always recognised the powerful difference which can be made when local people work together -putting service before self - for the benefit of their community.

Over the years Rotarians from the five Rotary Clubs of Wolverhampton have translated this into action and have been involved in the foundation and operation of many local charities including Compton Hospice and the  Wolverhampton MS Therapy Centre. 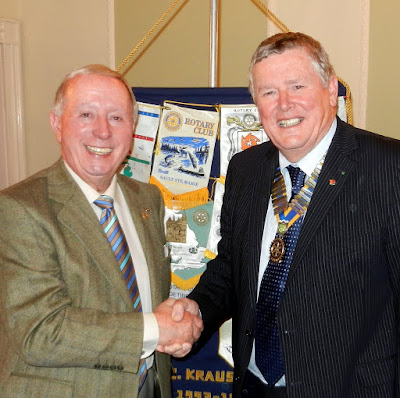 This year the Centre celebrates its 25th Anniversary and we were joined tonight by Wolverhampton Rotarian Peter Williams to tell us about its history, its current work and its future development.

The Centre operates a Hyperbaric Oxygen Chamber which helps to relieve the extreme fatigue which sufferers feel. It also offers a range of physiotherapy and reflexology services designed to alleviate some of the more distressing symptoms of the disease and to help sufferers to cope a little better with everyday life. Many of the services are provided with the assitsatnce of trained volunteers and Peter explained that more volunteer assistance was needed if the Charity is to continue its vital work into the future. Looking to the future the Centre has recently acquired additional premises which it is in the course of developing to provide further support for its users.

If you'd like to volunteer to help the Centre to continue its work or to make a donation towards its annual running costs of over £90,000 the Centre would love to hear from you and the Centre Manager can be contacted on 01902 744888.
Posted by Jim Murphy at 23:33

Its always great to welcome a new member to our Club and this evening President John had the pleasure of inducting Roger Lewis into the Rotary family. 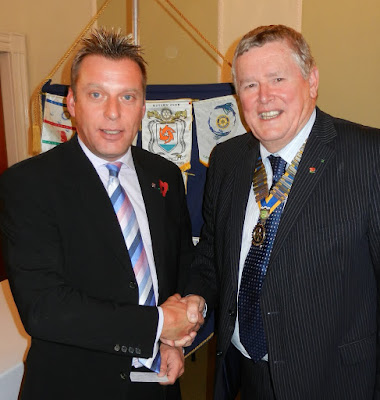 Roger, a legal executive specialising in debt recovery matters, lives in Bobbington with his wife and three children. The son of former professional footballer with Birmingham City Roger is a keen sportsman and we are looking forward to him teaming up with a couple of the Club's more recent recruits to mount a serious challenge in the District Golf competition.
Posted by Jim Murphy at 22:54